Now that Daytona has come and gone, ARCA teams around the region have plenty of time to prepare for the next race at the Nashville Fairgrounds on April 7th. The guys at Kimmel Racing are using this time wisely, working on just about everything there is to work on. 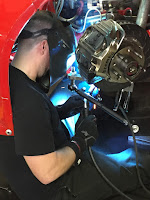 "Well, we've been working on #320 (Salem) for a while now, trying to get the front end where we want it. As soon as the weather gets nicer, we are going to Salem to test. There is so much that goes into these cars, and if we're off it's better to know a month before, rather than the first practice of race weekend. We've gotten a lot done on the street stock and we're even tinkering around with the late model for a possible race at Salem."

Team owner Bill Kimmel knows better than most how the rigors of a full racing season can push a team to its limit and admits that this break between Daytona and the second race of the year is helpful. "It's nice because it really helps the smaller and even medium sized teams. A lot of guys are just finishing things up in January and early February, then rushing for Daytona. It would really be difficult to run the week or two after Daytona"

It hasn't always been like this though. Even as recent as 2015, ARCA raced in March. For four years between 2012-2015, the series traveled to Mobile, AL. Most fans of the team remember Will's infamous wreck at Mobile in 2015. The series has also had stand alone events in the month at places such as Atlanta, Palm Beach, Lakeland (USA Int'l Speedway) and Nashville.

"With us being a series based in the mid-west, if we raced this early on in the year it would almost have to be down south. Anyone from this area knows that the weather rarely cooperates." 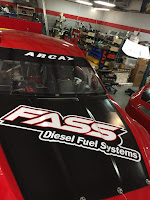 Kimmel Racing has ten ARCA races on schedule currently, seven of which will see Will Kimmel behind the wheel with the help of FASS Diesel Fuel Systems. Kimmel will pilot the famous red #69 at both Salem races, both dirt races (Springfield and DuQuoin), Gateway, Chicago and Kansas.

"We are really excited for this season, and our partnership with Brad and the whole crew at FASS," said Will. "We've always worked hard in this race shop, but it's different when you have a sponsor like FASS behind you. It's extra motivation. Of course, we want to go out and perform for ourselves. But we also want to make their whole team proud as well."

Alongside the busy ARCA schedule, the team has a slate of street stock races they are looking to compete in, with plenty of sponsorship room available. "Our plan is to run the street stock whenever we aren't running ARCA. Obviously there won't be something local going on every weekend we're off from ARCA, but whenever there is, we'll plan on being there." Loose plans include local tracks such as Salem, Anderson and Winchester as well as some regional tracks.

"It's going to be a busy year," said Bill. "We've been fighting to get back to where we need to be for a few years and the pole at DuQuoin proved that we are close. We are going to be more competitive this year. ARCA, street stock, no matter what we do."


Posted by Daniel Farish at 4:40 PM No comments: