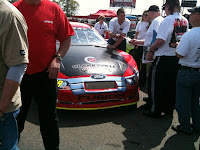 Posted by Kimmel Racing at 10:00 PM No comments: 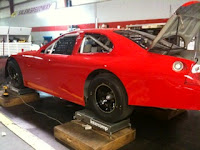 The car is back from being painted at Kahl's body shop, team working on finishing up the setup and then decal. The team is headed out on Thursday for Mobile, Alabama.

Posted by Kimmel Racing at 3:00 PM No comments:

MOBILE, Alabama (March 6, 2012) - - It goes without saying that Kimmel Racing and new driver Will Kimmel were one of the “feel good stories” upon the conclusion of the Lucas Oil Slick Mist 200 at Daytona (Fla.) International Speedway. After starting 23rd, Kimmel cleverly crafted his No. 68 Ford Fusion to an impressive third place.

This weekend though, as the ARCA Racing Series presented by Menards resumes action and steers back South to Mobile (Ala.) International Speedway for the running of the Mobile ARCA 200, the Kimmel Racing team led by championship crew chief and owner Bill Kimmel return to the racetrack but without sponsorship, something the team graciously clasped in the season-opener.

However, with Daytona winner Bobby Gerhart and second-place finisher Drew Charlson not expected to compete in Saturday’s contest, the family-owned team had felt they had no choice but to dig deep into their own personal pockets and make the drive to Mobile (Ala.) International Speedway for a variety of reasons.

“We talked it over and we felt like we just had to do it. I don’t know how, but we are,” said driver Will Kimmel, who will make his 26th career start this weekend. “Dad’s been working the phones and we have some sponsorship stuff in the works, just nothing in time for Mobile. But, we’re still going and we’ll take shortcuts that won’t affect us on the racetrack but will make the trip a little easier to swallow.”

The former Super Late Model champion at Salem (Ind.) Speedway added, “Honestly, Daytona kept our Kimmel Racing team alive. The phone was ringing when we came home and that was a good sign, but we still have a lot to prove. Realistically, we’ll enter the weekend as the point’s leader after finishing third, so we have to build on that. We’re bringing a really good short track car to Mobile, but we know we have to do everything in our power to try and bring it home in one piece.”

While many of the ARCA Racing Series teams elected to participate in private testing sessions at the half-mile oval, Kimmel Racing was forced to sit on the sidelines and will have to wait until Friday’s three and a half hour practice to dial in their No. 68 Kimmel Racing / Clarksville Schwinn Ford Fusion.

“Obviously, there’s a little disadvantage for those of us who didn’t have the chance to test, but most of us will be on the same playing field, so that puts our mind at ease a little bit,” Kimmel offered. “We’re going with a baseline setup and after talking to some of our friends in the garage, we kind of know what to expect, so I think we’ll be okay. We just need to stay focused on the job at hand and hope again we’ll have some luck.”
Beyond Mobile, Kimmel feels that the third race of the season at Salem (Ind.) Speedway will be a race that they confidently feel they’ll be able to compete at – but past that, the remainder of the season remains up in the air.

“We need some help,” the elder Kimmel explained. “Will did a phenomenal job at Daytona and it’s nice to know that we have some things working – but nothing’s secure until the contracts are signed. A third place finish was nice at Daytona, but one of the main reasons sponsor or no sponsor that we’re heading to Mobile is because we believe that Will can put our car in Victory Lane. We’re not just going for him but for everyone else that believes in our race team”
Kimmel’s nearest competitor in the championship standings is Brennan Poole who currently sits seventh overall and 20 markers behind the Sellersburg, Indiana racer in the race for the coveted ARCA championship trophy in its 60th season of competition.
For sponsorship inquiries with Kimmel Racing, interested parties are urged to contact Bill Kimmel at 502.645.9370 or bill@kimmelracing.com.

The Mobile ARCA 200 (200 laps / 100 miles) is the second of 20 events on the 2012 ARCA Racing Series presented by Menards schedule. The first ARCA race held at MIS is a two-day show. Practice begins Friday, March 9 with a three and a half hour practice session planned from 1:30 p.m. - 5:00 p.m. Menards pole qualifying presented by Ansell is set for later in the day at 7:00 p.m. An on-track autograph session has been etched in on race day, Saturday, March 10 from 12:00 p.m. – 1:00 p.m. The event will take the green flag shortly after 2:00 p.m. The race will not be televised on SPEED but additional race coverage including live timing and scoring will be available through the ARCA Racing Network (ARN) online at arcaracing.com. All times are local.
For more on Will Kimmel, please visit willkimmel.com.