Will drove #68 "Sandra" across the line in 3rd place for Kimmel Racing in the Lucas Oil Slick Mist 200 at Daytona Speedway. The team worked hard all weekend and what a great start to the 2012 season.

ARCA practice is from 1pm-5pm on today (Thursday) at Daytona Speedway. Live timing and scoring at www.arcaracing.com.

The team had a busy day on Wednesday getting through tech. They have worked throughout the morning preparing for practice of the #68 Ford Fusion driven by Will Kimmel.

Become a fan of Kimmel Racing on Facebook for updates and pictures from the track.

Thanks for your support!
Posted by Kimmel Racing at 12:01 PM No comments:

DAYTONA BEACH, Florida (February 13, 2012) - - The original settings of Kimmel Racing have changed but the team lives on and is ready to shine as the ARCA Racing Series opens its 60thseason of competition when the Lucas Oil Slick Mist 200 takes the green flag at Daytona (Fla.) International Speedway Saturday afternoon.
Will Kimmel, the son of Kimmel Racing owner Bill Kimmel will heed the leading role for the Indiana-based race team as the driver of the No. 68 Enterprise Software Development / Clarksville Schwinn Ford Fusion. For the second-time in his ARCA career, the 23-year old will grasp the high banks of the 2.5-mile superspeedway and look to ignite his 26th career start in stunning fashion.
“We’re blessed to be going to Daytona,” said Kimmel, whose holds a career-best finish of second in ARCA at Salem (Ind.) Speedway last September. “Dad (Bill) and our all-volunteer team have worked ferociously to get our No. 68 Enterprise Software Development / Clarksville Schwinn Ford Fusion ready to go for this weekend and I believe we’re more than ready. We learned a lot from the test in December and I think with the changes since then we can improve on our Daytona debut from 2009.
Despite a 18th place finish in his restrictor plate debut at “The World Center of Racing” three years ago, the team came prepared with a stout blue oval which boasted an impressive eighth place qualifying run only to be sidelined by a mid-race incident which resulted in the finish. Knowing that restrictor plate racing brings a lot of unknowns, Kimmel also knows that the chance is now for his team to shine and keep their momentum rolling for 2012.
“You cannot predict what happens at these plate races,” offered Kimmel, a former Super Late Model champion at Salem (Ind.) Speedway, his stomping grounds in his home state of Indiana. “Despite that being said, we still have a job to do. We’re going to try our best to run the full season, of course sponsorship pending. A good finish will definitely help in making a championship-run possible. Nonetheless, we’re going to Daytona with a great group of sponsors and it’s our job as a team at Kimmel Racing to put on an electrifying performance.”
With his father and ARCA champion crew chief Bill Kimmel calling the shots; Kimmel doesn’t feel the pressure of performing but rather using the bond as a chance to explode into the limelight with potentially his first career win.
“Daytona, means so much too many of those on our race team,” Kimmel sounded. “It’s a place that is magical and can bring those types of results. But, having Dad atop of the box doesn’t affect the way I drive. He believes in me and I believe in him. It’s a partnership that we both trust each other. We both know though it’s going to be a tough field by looking at the entry list, so timing will be everything and patience will be vital to the eventual outcome. We’re just thankful to be a part of the action.”
In addition to Enterprise Software Development (ESD) and Clarksville Schwinn, Kimmel Racing is thankful for the support of Crosley Radio and Ingersoll Rand who have joined the veteran ARCA organization as additional sponsors for ARCA’s version of the Super Bowl.
“I feel like we are forever indebted to every person and sponsor who is making this trip to Daytona possible,” Kimmel remarked. “We know that without them none of this would be possible.”
The Lucas Oil Slick Mist 200 at Daytona (80 laps / 200 miles) is the first of 20 events on the 2012 ARCA Racing Series presented by Menards schedule.The 49th ARCA race held at Daytona is a three-day show. Practice begins Thursday, February 16 with a four hour practice session planned from 1:00 p.m. - 5:00 p.m. Menards pole qualifying presented by Ansell is set for Friday, February 17 slated to begin at 2:00 p.m. A forty-five minute final practice session is etched in on Saturday, February 18th from 10:00 a.m. - 10:45 a.m. The event will take the green flag later that day shortly after 4:30 p.m. The race will be televised live on SPEED with additional race coverage including live timing and scoring and radio broadcast through the ARCA Racing Network (ARN) online at arcaracing.com.  All times are local. ARCA, celebrating its 60th season in 2012 is the preamble for the highly anticipated Budweiser Shootout for the NASCAR Sprint Cup Series (NSCS) set to ignite under the lights later that night.
For more on Will Kimmel, please visit willkimmel.com.
PHOTO CAPTION: Will Kimmel, driver of the No. 68 Enterprise Software Development / Clarksville Schwinn Ford Fusion in the ARCA Racing Series presented by Menards for Kimmel Racing.
MEDIA CONTACT:
NAME: Chris Knight, Knight Motorsports Management
PHONE: 239.834.9797
EMAIL:  chris@chrisknightpr.com
Posted by Kimmel Racing at 11:26 AM No comments: 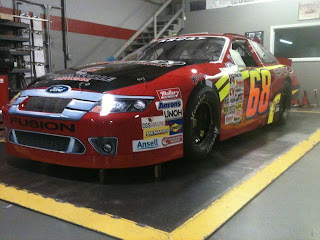 Posted by Kimmel Racing at 8:00 PM No comments:


Posted by Kimmel Racing at 9:00 PM No comments: