Circle Track Magazine, the #1 Source for Advanced Racing Technology, announced today that it has renewed its personal services agreement with ARCA Racing Series driver Will Kimmel. Kimmel, the third generation racer from Sellersburg, Indiana will represent the Tampa, Florida based publication for the 2014 season.

Kimmel and Circle Track, the largest short track racing media platform in the country enjoyed a successful year together that saw the 25 year old finish 8th in the ARCA Series points standings while competing in a handful of Street Stock races at his home track of Salem Speedway. With a solid relationship built, they plan on expanding their activities in 2014 with a brand new project.

“Toward the latter portion of last year, Will and I were discussing some ideas regarding Late Models and how we could take some of the technology we present in the pages of Circle Track and merge it with what Will and his team do at the ARCA level,” explained Publisher Rob Fisher. “Would it work? Would it not work? We’re going to find out.”

“Racers are always innovating, trying new things. It’s how you find better ways to go faster,” said Kimmel. “We came up with a concept for a Super Late Model that incorporates a truck arm style rear end with a more conventional Late Model front end. While it’s been tried a few times in the past, we are adding some pretty unique features that should make the car very competitive.”

Upon hearing of the idea Fisher thought it that it would make an excellent platform for a Circle Track project car. So, working with Kimmel’s Indiana based team and veteran North Carolina car builder Billy Hess, the trio set out to build what was aptly dubbed Project SLM. The car debuted to a great deal of interest at the 2013 Performance Racing Industry trade show in Indianapolis.

But this car isn’t just going to be a showpiece. A heavy testing schedule is planned for the car to dial in the rather unconventional setup. Once complete Fisher and Kimmel plan on campaigning the car at five marquee Super Late Model races in 2014 including the Winchester 400 and the Snowball Derby.

“At Circle Track we build cars, we test cars and we race cars, so it is only natural that we put this latest project into competition at the highest level,” said Fisher.

Beyond the track, Kimmel will also be featured in both promotional videos and technical articles as well as acting as a spokesman for the 30 year old publication. Many of those articles will focus on Project SLM.

“I’m very grateful to be working with Circle Track again this year. Everyone in our family has been reading the magazine for years, so we all know how big and how influential they are.” said Kimmel. “They cater to real racers with real hardcore technical articles that teach something every time you open an issue. I’m proud to continue to be a part of their team.”

All of Kimmel’s 2014 activities as well as the other projects for Circle Track will be chronicled in print and online at www.circletrack.com as well as the magazine’s various social media outlets. Those outlets include:

Will Kimmel is also active online you can follow him on the following outlets:

About Circle Track:
For the last thirty years, Circle Track magazine has taken the most complex technical subjects and theories and put them in practical terms for racers of all levels. It is the proven source for dirt and asphalt Saturday-night racers to obtain the latest in racing technology and how to apply it. If it has an engine and somebody races it, Circle Track speaks to that consumer, with an emphasis on expert-level car construction, engine building and tuning, safety equipment use, chassis tuning, and racing technique. Reaching more than 200,000 racers through its print publication and comprehensive website, Circle Track is the largest motorsports publication in the country.


Will Kimmel, the son Bill Kimmel and nephew of 10-time ARCA Champ Frank Kimmel, has earned an impressive 13 track championships and over 90 career wins. He became the first rookie driver to ever win a feature event in his first Super Late Model start at the notoriously difficult Salem Speedway. That same year he became the youngest driver to ever win the Salem Speedway Super Late Model Championship at only 19 years old. Two years ago he started 21st and finished 3rd in his debut run in the ARCA 200 at Daytona International Speedway. Last year he was running 5th in the same race when a flat tire ruined his day.
Posted by Kimmel Racing at 5:07 PM No comments:

Michael Lira and Kimmel Racing Gear Up for 2014 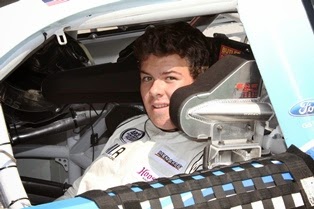 Michael Lira has a lot to be excited about in 2014.  In addition to continuing his studies in the International Baccalaureate Program at Spruce Creek High School in Port Orange, Florida, and defending his No. 1 state ranking in trombone competition,the talented 16-year-old stock car racer plans to run 14 races in the ARCA Racing Series presented by Menards with Kimmel Racing.

Lira has been busy in the last month preparing for the upcoming season.  When the ARCA Racing Series held a weekend of testing sessions at Daytona International Speedway, Lira was granted special permission to participate.

“I was very excited to test at Daytona,” Lira said. “I’ve grown up watching my dad run sports cars there, and getting to experience it for myself was an incredible opportunity. I learned so much in just one weekend there, and it has definitely made me a more confident driver.”

Lira has also been busy working to secure additional sponsorship for the upcoming season.   The young racer is looking to “get out the vote” as he seeks a spot on “Team Champion” in Champion Spark Plugs’ “Search for a Champion.”  Internet voting is open at alwaysachampion.com now through February 2 and fans of the Florida driver can help him reach the next level in his career.

“Sponsorship is such an important part of racing,” Lira said.  “The Champion ‘Search for a Champion’ program will award 15 drivers with funding for their 2014 seasons.  Participating in the contest is a lot of fun and I am hoping we can drum up enough support to help us with the funding we need to be successful.”
Lira will drive the No. 69 Ford Fusion for Kimmel Racing for the 2014 season, with Gary Yeomans Ford as the car’s primary sponsor, in addition to Costa and AttorneyatLaw.com.  The team is headed by legendary ARCA crew chief Bill Kimmel, who won eight consecutive championships in the ARCA Racing Series from 2000 – 2007 as the crew chief for his brother, Frank.

“I couldn’t ask for a better mentor than Bill,” Lira said.  “He’s had so much success in his career, and I’m eager to learn as much as I can.  Kimmel Racing is such an established and successful team in ARCA.  It is a championship-caliber organization, as they have proven in the past, and I’m excited to do my part in continuing that tradition.  I want to improve as a driver, and I want to win.  There’s no other team that I would rather be a part of.”

Lira faces a challenging schedule in 2014 and will rely heavily on mentor Bill Kimmel for coaching as he travels to some of the country’s most famous speedways.  Lira will face a variety of tracks including ARCA short-track staples like the famous Berlin Speedway and Lucas Oil Raceway.
Lira began his ARCA Racing Series career in 2013, running four races with Kimmel Racing, but 2014 will be his first real test in the series.ARCA rules dictate that, because he is only 16 years old, he is not eligible to race at tracks that measure more than one mile in length. Once he turns 17, Lira will be authorized to run the intermediate tracks as well, which include tracks up to 1.5 miles long. Only once he turns 18 will series rules permit him to run the full range of larger tracks and superspeedways.

“While Michael will not be able to compete on the superspeedways for a few more years, the test sessions at Daytona were an important learning process for him,” crew chief Bill Kimmelsaid. “We’re encouraged by what we’ve seen from Michael so far. He’s still very young, but he’s had a lot of success early on, and we’re confident that will continue in the upcoming season.  We’re very happy to have him as a part of Kimmel Racing.”

Lira will face his first test of the 2014 season March 22, when the ARCA Racing Series presented by Menards heads to Mobile International Speedway in Mobile, Alabama, for the ARCA Mobile 200.For up-to-date information on Michael Lira and the No. 69 Kimmel Racing team, go to www.michaelliraracing.com.

Michael Lira Racing is based on Port Orange, Florida, and fields entries in the ARCA Racing Series Presented by Menards in association with Kimmel Racing.  Driver Michael Lira is a 16-year-old standout high school student who regularly competes in Late Model racing series events in and around Florida.  He made his ARCA debut in 2013 and is scheduled to compete in 14 ARCA races in 2014 with support from Gary Yeoman’s Ford, Costa and Attorneyatlaw.com.
Posted by Kimmel Racing at 12:34 PM No comments: